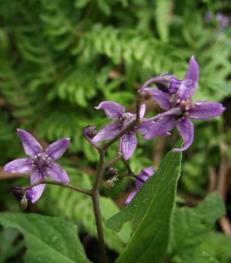 From the Solanaceae, a rather varied family of plants, sometimes breeding the nootropics, sometimes just the opposite. It is rarely touched by animals. The chemicals Solanine come from the unripe fruits, and Solasodine from flowers, and Beta-Solamarine from the roots. The former of these is the one that is poisonous to humans. Purging, burning of the throat, dysrhythmia, headache, dizziness, hallucinations, loss of sensation, paralysis, dilated pupils, hypothermia and in rare times death have been caused from consumption. It is a vine that climbs over other species and grows in many ecosystems like marshes, woods, shrubs, and scrubland.

When you slit the stems of this plant, it drips out a milky substance that has latex, alkaloids, and cardenolides, these are narcotic. They are coated with wax and small hairs that also prevent caterpillars from eating them. Inside the sticky juice is cardiac glycoside, which inhibits special animals cells from functioning properly. It would cause death if an animal were to eat 10% of it’s own weight in milkweed. African indians made darts with the chemicals on the spearheads to help with the hunting ritual. There are at least 39 different species of the milkweed; (Pallid, Mead, Mojave,  Serpentine, Horst-Tail, Indian Paintbrush)

An overdose of foxglove results in anorexia, sickly jaundice, breath shortness, headache and blurry halo vision. It has been cultivated by herbalists ever since they found out it could control the human pulse, thus brought into pharmaceuticals. The whole thing however is toxic to humans, felines, canines, cattle and other livestock. But it sometimes is confused with comfrey, a common tea. Digoxigenin is found in the flowers, which is a natural steroid.

Also of the Solanaceae clan, sometimes I think this family has an here-to unknown social intelligence and waxen plans to inflict suffering to all botanists who harvest and use them. It is steeped in lore, and even found in the lyrics of metal bands. In the mythical texts “mandrake would only grow where the semen of a hanged man had dripped on to the ground; but scientifically, the mandrake is quite dangerous if used improperly or unless you are Chinese and find medicinal uses in everything! I acquired this from an occult shop that had it imported. It was stocked with the resins and incense but would probably cause breathing problems if I had burned it, so I keep it in a jar. The effects can be those of hypnosis, where alpha brain wave activity causes similar effects to REM or lucid dreams, but instead is insomnia inducing. In higher doses is makes the neophyte user go into delirium, hallucination, depression and sometimes coma. The three chemicals, found in many narcotics and psychadelics which are also in Mandrake are atropine, scopolamine, hyoscyamine. These are not very versatile and if their levels are imbalanced, are the cause of such potent physiological  effects. 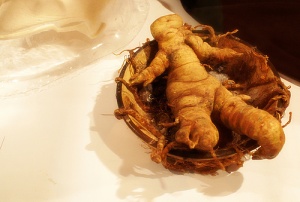