I recently made a symbolic adoption of a Capuchin monkey (Cebus capucinus) living in a sanctuary in Cornwall, England. The Wild Futures group is set up for protection of primates of all kinds that have been used and mistreated in medicine research, the underground pet trade, and entertainment.

Grips is specifically a black-capped capuchin born in 1997, but didn’t arrive in the sanctuary until 2010. His mother died and he was raised by the human owner but obviously neglected and fed the wrong food. Thus he has high glucose and is being treated with special food/conditions. This was a picture of him with his two sisters in their old ‘home’. The other two are from the sanctuary. 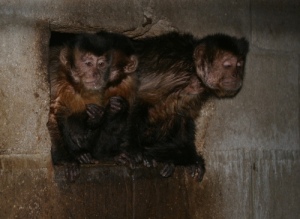 Capuchin monkeys have learned to exploit almost every kind of forest, yet they are critically endangered for because of hunting/deforestation and pet trade. They are amongst the most intelligent of the higher primates. When shown their reflection, they respond with a sense of self-awareness. Other animals usually cowl or confront the reflection as if it were another animal. This recognition as a strange phenomena is the exact same in uncontaminated human tribes of the East, like those in Africa/Borneo and Amazon. They are aware of the appearance of their kin but not fully of their own selves. Some theories are that they have a theory of mind, meaning they could empathize with other Capuchins of their species. They are know to use tools in a modded hammer and anvil style, with river stones to break open shells of nuts, and use the entrails of millipedes for keeping insects like mosquitoes from biting them. They are even known to comprehend money, using a trading system! Their diet is of the most diverse of the New World monkeys because they eat approx. 96 different plants, nuts, seeds, small vertebrates, birds, crustaceans, and shellfish, but are prey to the Harpy Eagle, and Jaguar.

Since the rehabilitation in the sanctuary, apparently his coat is much better in quality, and is becoming more social. The group gives these monkeys, indeed our quadruped ancestors, a better life. they also support another similar group in Chile.