To the practicing vitki, the journeyman, or the runemaster who knows a relationship with the ancient runes, they are a synthesis to each other. One finds what one wills in each rune and embrace life by an epic mythology. The runes have always been as tools, used by our species to understand, explain, and reflect on the world around us, the situations we take on, and 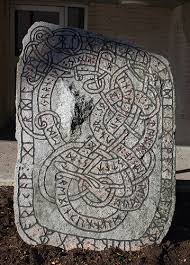 our experience with the natural and material world.  There are full systems of runes ranging from different time eras; the Elder Futhark C.E. 150–800, Anglo Saxon Futhorc AD 400–1100, Younger Futhark C.E. 800–1100,the long branch runes which comprise the Marcomannic runes, the short branch Rök runes, the Hälsinge runes (staveless), the Medieval runes 1100-1500C.E., and the Dalecarlian runes 1500–1800. The ‘Runic Era’ sometimes described in Teutonic gilds, and heathen literature was in the year 150, when the first runes were inscribed. There is something intriguing about the temporal nature of runes, and the way they transform, evolve and are translated in new ways during the progress of civilization. It is not so much that they have lost their meanings, or are forgotten, but that they embody a new archetype or are like a vessel containing new energies as the way we interact and form relationships changes. I became interested by the runes in the fashion that they may tell me something deeper about myself, and I think this would be a humble point to admit by most who use them. The advancements of sciences like biology, anthropology, and archaeology have unearthed such vast contents of information of earthen relics about the runes, seemingly gone forever, yet preserved, reiterated, and awakened to new avenues by us.

What I am trying to purvey is the possibility of adapting the runes to our modern world to do what the ancient staves told the Vikings, or the Anglo-Saxon tribes. Would it be efficient to create contemporary inscriptions resembling runic scribe in order to explain, understand, integrate and master in the kind of cultivated world where many forces, societal structures, morals, and cultures are extremely different from the Saga ages. I think, there is only a limited amount of phenomena that 24 or so runes can be manipulated and stretched out to be relevant to us. We live in industrial ecosystems rather than natural ones, we  rely on others everyday and put less responsibility on ourselves, view animals in exploitative ways, and have advanced technology. In this sense I believe the rune itself take on an ephemeral nature. What I find skeptical in many books I have read and browsed from several different kinds of authors and scholars so far is that there tends to be a threshold wherein they are trying to use essentially a non-verbal language crafted and expressed long before our generation and imparting 21st century values to them, or judging them using rationalistic, purely cognitive approaches. Whilst this may not be the most appropriate or accurate way to get in touch with the old runes. Handbooks and the like, while they sometimes offer useful historical knowledge still bend and shape the runes to how they see fit or translate them egotistically and single pointedly to situations that are likely to be affecting the reading, in order to sell the idea, or offer some form of pseudo-esoteric connection to something special and enlightening, when really they are just confusing.

The problem comes to me as a great paradox, I have only been in touch with the runes for some months (though with high dedication), and have known of them for perhaps 4-5 years relatively, but already I am feeling that something may be

missing. It is questionable but also cathartic that I have come to this theory all ready. I don’t know it all, and have lived my life by being content with always being awareness of the impenetrable nature of reality about myself. I like the change and growth process that comes with new inner revelations. My ideas with modern runes is something that takes on the role of a new mythology, one that represents our current narrative in life. Within it is cosmic will, totality, but also archaic meaning, and an ancestral story to be told. The Proto-Norse, Germanic, AS, etc. who came before us used the runes because it was what they knew, it was them. There were no intentions of ending it one fateful day. With the idea of upholding tradition, I feel needs to carry such attitudes into the present, even if it be on some small scale, not sloughing off the purist sentiments of the runes long past but yoking together my own ontology in the same vein that a nomad Viking band would have done in coastal Iceland or a group of settlers adapting to life in the Iron age and the further in the face of the Christianization of Europe. Were there runes that began symbolize or take on new meaning for the written saga, or one for raids, or for some new tool or method of travel. The gildmaster of the Teutonic school I am apart of has written before of using runes also in atypical ways, like for those who are geurilla painters, to paint runes on abandoned and crumbling structures, symbolizing the power of something pure on a failed creation of man. This in itself could be a rune, as it seems culturally specific to our age with the amount of global decimation that is happening. Also using the runes, and your own created bind staves only for the purpose of destroying them after, so that they only are actualized for a moment and then never used again. This is something to think about, and may be worth developing further of using different runes, to coincide with the gestalt of a profoundly different lifestyle.