If you spend long enough in a tree cemetery, and put your shovel down into the ground more than a felon swings his mattock, you will start to really think about what your doing is no kind of hippy love affair with the forest, and the

backbreaking labor alone will make you feel as if you might as well had the chain around your ankle some days. You start wondering why you are doing it, and how you were convinced once again to don the leather bags, that has become to standard. For me, planting has become a sort of penance in this last year. I enter into a camp full of woes or guilt for one thing or another, usually having just went through a relationship fail or depression or period of destitution. Unlike most planters, I see the irony and the tragedy in planting trees, sometimes it can be good, like I would imagine cell mates getting their one hour to be outside and breath the air, look at birds, and lift weights, then back to the grind and the 3 walls and iron, or in my case, the slick rain, broken slash and thorns to trip you up, and the old piecework rates to keep you struggling. Just like our forefathers in the mines and cotton fields. Tree planting started out as labor camps in the prison systems of New Zealand. An article from the newspaper, The Mercury dated June 1911 reads “Prisoners on the Land   The New Zealand System” an excerpt from a fuzzy scan I was able to find online reads:

“we have isolated spots which lead as it were, to nowhere, and from which escape would be almost impossible. During the last five years only one prisoner got clean away. and I believe lie is now serving a sentence in this State. We have three tree-planting camps in Waiotnpu, 21 miles from Rotorva-Waipa. on the shores of Luke Roto-Kakhi, and Hanner Springs, 90 miles north of Christ church. The first, which is the largest has accommodation fr 70 prisoners, but at present contains only 36. About 10 per cent, of the total’ number of convicts are at present engaged in tree planting. The prisoners are housed in weatherboard structures, one hut, with two distinct rooms. Each room has a window, and the prisoner is supplied with mattress and blankets; Some years ago-a fireplace was provided, but the prisoners used to go out, trap rabbits and birds, and roast them. Of course, that had to be stopped…

There isn’t a rifle on the place. In the early morning a warder is sent out three miles over the hills with the prisoners. The warder is unarmed, while the prisoners take out with them long ‘slashers’ and other implements. What would be tho use of arming a warder when there are 10 men, with slashers. A slasher is about four feet long, and very sharp. The men could overpower the warder if they wished, but the point is that they don’t desire to do so.

it also says the the convicts usually have to earn trust and be in their third year before planting and that Since 1901 we have planted over 33 million trees, one prisoner alone planter 3000 in a day. The men appreciate being sent away tree-planting, and work hard with the object of obtaining; some remission of their sentence.” So perhaps they eventually grew fond of the hard labor. Planting in prisons were also introduced in New South Wales in the early twentieth century and the Mukobeko and Khami prison in Africa. 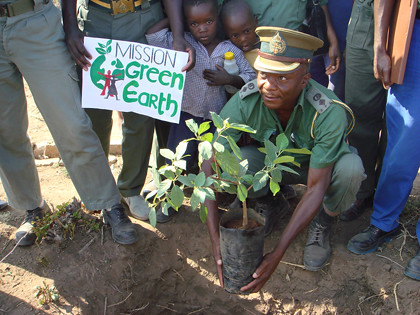 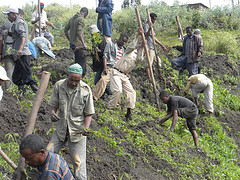 Nowadays, tree planting, at least in North America is Britain has become one giant monoculture atrocity. I disagree heavily with the practices of the modern forestry who are aiming to grow timber and non native species for cabinets, hotel furniture, newspaper, and other useless creature comforts. The work of forestry has seem to evolved into this irreversible mess, that doesn’t resemble nature. Only now are sustainable practices seeming to be developed. I currently plant in northern England, bordering on the Penine Mountains in the Lake District. These past two weeks I put in my crimes and times down in a natural woodland, none of the alaskan spruce and pine from overseas, as much as I appreciate them as trees. Under the rolling glens, a mere century ago, miners bore and worked in tunnels and shafts next to the Irish sea. I remembered these men in a way as I planted. bird loving cherries, aspiring oaks, sacred rowans, hallucinogenic yews, pure birches, and missive hawthorns. I personally can’t bring myself to the bore of just the work itself anymore. I try to make it interesting. I put spells on my trees, I take time to actually enjoy when I can, and I don’t care about going fast.

There is work all over Canada, England, Scotland, New Zealand, Australia, USA, and as of late, Africa, Norway and Iceland from what I know. I am definitely not through with it all yet. From the mattock to the bizzare Finnish pottiputki, right down to the d-handle, and the seed balls, they all have their own kinks and aces about them, and these hands have been scarred and bled with most of them. I’ve penetrated the dark moist vaginal openings of the earth about 150,000 times now, and I still wonder if it is enough to carry on. I can only hope they meaning something as much to the rest as they will to those who walk beside them, and those who went before me. Roughened men of peasant life, outlaws, bush roamers, and forest tramps like myself. I honor you.

Below is a tricky little seedball recipe by a certain wise wizard behind the iron:

1-2 parts native seeds of your choice

Mix the soil, clay and 1 part water thoroughly. There should be no lumps. Slowly add more water until the mixture is the consistency of the toy store molding clay that comes in a can.

Add seeds. Keep kneading the dough until the seeds are well mixed in. Add more water if necessary.

Take small bits of the clay mixture and roll into ball about one inch in diameter, or desired size. The balls should hold together easily. If they’re crumbly, add more water.

2 thoughts on “Tree Planting Started down in the Prisons”