Taking the ferry from Helsingor to Helsingborg, and arriving by sea, to Skane marked my first movements in the territory of Sweden. A new flag to fly on my global journey on this heathen pilgrimage, and what I hope to be, worldwide travel. Though these events happened over a month ago, I am now writing these from the other side of the Atlantic back on the shores of Canada, with time for reflection, and digestion of my experiences in this Scandinavian second home.

Naturally, any ‘pilgrimage’ to the sacred sites of our pagan forefathers must include the kings graves at old Uppsala, I have purveyed a more spiritual account of this in an earlier post, so I shall keep the information here limited to the how and why I came here. Originally a planned visit to Omberg, a mountain in the Ödeshög municipality was intended, but troubles on the road encouraged me to pass blithely on the highway, for lack of adequate transportation. Instead, with all intentions set on the Uppsala graveyard, I took a train from the modern city, a fairly pleasant university center with a high

population of youth, and canals snaking through the town. Uppsala is bordered with Lake Mälaren, and the river Fyris. Nearby historic town of Sigtuna is said to be where Odin himself lived, with Uppsala is where Freyr settled, and owned the land. At Gamla Uppsala, I encamped myself in the nature reserve near the Eriksleden

trail. For two nights I slept near the mounds and read the runes on the rocks, sat by the river Fyris, and watch the golden fields of wheat bend and sway in the breeze. I talked to a local farmer with special black breed chickens who told me of an ancient Viking settlement just beyond his small farm. Two terraces were also located near the mounds, probably the sites of two longhouses, like those found at Lanse aux Meadows, Trelleborg, or elsewhere in Scandinavia. The place carried a certain bioregional energy about it, and though the scenes from Vikings did loom in my mind, of the dark temple on the hill, through deep broadleaf forest, from the walking trails of the reserve, this picture was not so far off and made me think of just how elusive this place was. The last reserve of the pagan faith. The mushroom told me things about the Gods, and their ways, that I believe are reserved to those only who sit on the mounds, and with that, I fled with this mead of knowledge.

In Skåne, I took a coastal route through Lund, Malmö and Höllviken, visiting the picture stones once observed by the 17th cent. Danish physician and antiquary Olaus Wormius. From the Hunnstead monument, once located in Ystad, carved at a time that Scania belonged to Denmark. 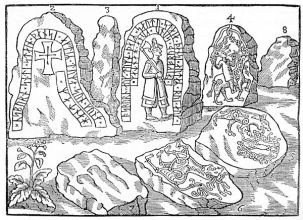 They were the largest and most famous monuments of their time. Some of the stones were destroyed during for bridge and house building during the modernization of Scandinavia, so it is an amazing piece of historical heritage to even glance at these stones now. One of the runestones shows a man from the Varangian guard, dressed in a longcoat, with the latinized rune inscription. Another one shows a cross, and the other most interesting one shows a hag riding a wolf creature, who is also holding two snakes. She is believe to be

the giantess Hyrrokin, who appears in the mythology as she who pushed Baldr’s funeral ship into the sea. These were the most fascinating pieces of Nordic art I had witnessed since seeing the Gotlandic picture stones about a month before. Located now at the Kulturen museum, outside, were also three rune and picture stones, one picturing a lion. Lund had several runestones located in the Lundagård, one depicting an interesting picture of two wolves, wearing both shields and swords on their bodies. There is also a mound near the old King’s house in Lund with 6 runestones. After visiting Lund, my count of authentic runestones visited throughout the world probably peaked 20, but of course there are hundred more in the countryside I have yet to see.

After staying in Malmo for two weeks, I went to volunteer in the Foteviken Viking reserve, choosing to live the days in an Iron age setting. I learned how to make traditional flatbread, amber carving, tin smithing, and basic blacksmithing. When the Foteviken reserve was closed, I combed the beaches at Maklappen watching rare seabirds, and seal colonies, and hunted for amber at the Falsterbo peninsula. For a week I lived in a thatched wooden Viking house, on the bay of Foteviken, from my window and across the waters was Copenhagen, and about 500 feet from my door was the mound of the battle of Foteviken. I soon left the Scandinavian shores, it seems as I was just getting my teeth sunk in. The German chapter will have to wait to be written for future travels.