Before reading this part biographical, part memoir and historical account of Humboldt’s life and journeys in South America, Russia and Venezuela, I can honestly admit I did not know the character. A man well before other naturalist writers, like Muir, Thoreau, Darwin, & Haeckel. His life works came to inject a current of holistic understanding into nature’s complex biography. This tome written by Andrea Wulf, literates Humboldt’s well, not so humble beginnings, he was born into an aristocratic family, though his mother and father always expected more from him. For years they tried to shape him on the potting wheel of the latest moral ideals of that time. There is a stress on the political climate of Humboldt’s childhood right through his coming of age, and later years of life. There are descriptions of him and his brother, who seemed to long for entirely different ideals in life, one entirely reserved on his studies of language and scholarly things, and one on completely immersion in nature. This is an interesting kind of ‘twin paradox’, though the brothers were not twins, but are archetypal of the diversity of even closest relatives and the mystique of what fate becomes a man, regardless of birthplace, parental heritage, or cultural surroundings. It actually reminds me somewhat of the split in persona between myself and my own brother, one (the author of this journal) a wanderer, feral, and extrovertive with the right people and places, the other, rather sedentary, domesticated and reserved. After this early smoke clears and goes through Humbdolts desires to travel, he eventually finds a place on a ship and makes a journey through Venezuela and the Americas of the new world. 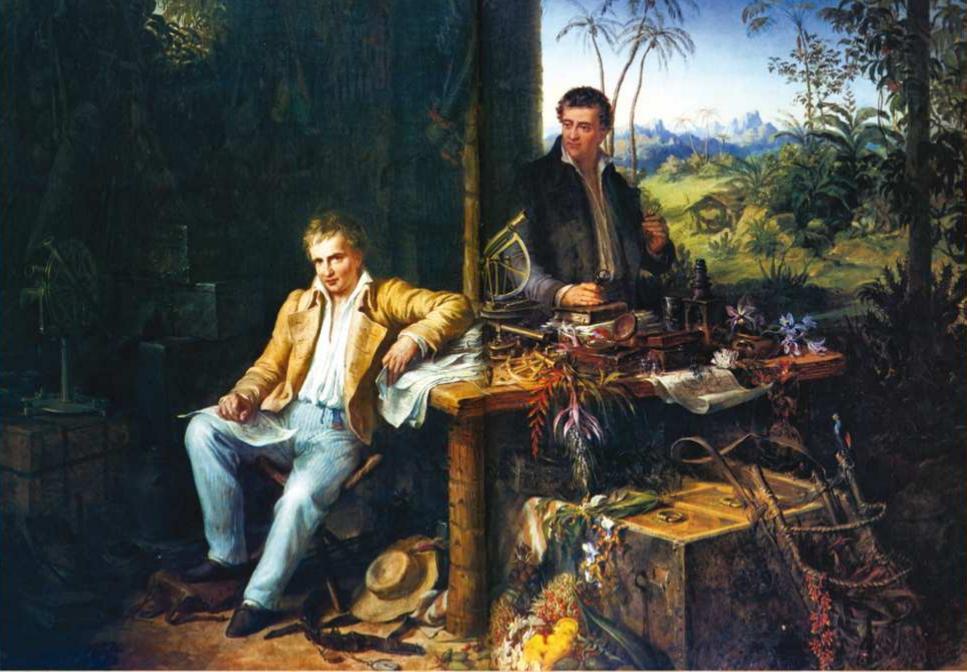 What follows are sweeping prosaic accounts of his personal steps in a time before plane travel, and mass tourism. I find these narratives of old most interesting for their pioneering value, the adventures in the jungle were not catered and mapped out along distinguished tourist routes like what modern day Latin and Central America. Those who visited these parts of the world were left to their own devices, brought in their own maps, or made them by hand, carried several scientific instruments, a camera was usually not one of them, made their own rations and food supplies, and relied on biological and botanical knowledge to read the landscapes they now inhabited. These were not just quick trips into the Amazon or the Andes for bragging rites, a few selfies and a return to the hotel. Humboldt met some of the Indigenous people and hired one or two of them along the way for assistance, but his journeys lasted longer than a year, in which he was collecting specimens, taking measurements, making sketches and diagrams, writing journals and hypothesis, analyzing natural phenomena, sending letters, pressing plants, and gathering knowledge from locals. These were exhaustive journeys.

The book follows his beautiful adventures in the Andes, and traces his observations on deforestation, man’s effect on nature, and slavery. But the main vein of his travels focus on the new insights he brings to the ontology of nature, his precious observations, and poetical way of narrating his account. He eventually meets Thomas Jefferson, and lives like his right hand man before returning back to Europe, stocked with new specimens, collections, books filled with data, and so forth. There is melancholy in his new life, as he drifts between London, Paris, and Berlin quite often, teaching lectures, classes, meeting with scientists and naturalists, and trying to plan another trip to India. Though his fame grows as he lives royally under honor of the King, but he doesn’t enjoy being back in Europe. There is an emphatic strain here I can relate to as he comes back from his epic adventures into the highly modernized and progressive Europe which is at war at the time. He feels a loss of authenticity and wonderment in his life. Something felt by almost all travelers I know after going home from a long time away in the world into foreign landscapes and cultures.

After years of trying to convince a branch of the Indian government to allow him to travel there, he is still not permitted. But over thirty years later he finally is able to forge eastwards to undetake scientific research on geology and mining, which he uses an an excuse to wander through Russia, Mongolia and the China border of his own accord. The most important aspects of this book are his observations of the patterns of nature, such as what he observed at a river in Russia, where the plants on one bank are entirely different from the other, this posed a new theory of the geographical movement of different species across the land. And not only this but many of his thoughts were quite radical and praised at the time, the world beyond Europe was so exotic to the white man. Some things that are today common knowledge also took root in Humboldt’s ideas, like his Naturegemalde picture which showed the regions, lattitudes, and longitudes of plant and arboreal distribution, using a mountain as an emblem to show this and later compared his findings to studies in Europe and Russia.

After the portions about Humboldt, there are small sections

about other naturalist writers who came to know a kind of solitary fame, namely Darwin, Bonpland, Thoreau and Muir. There are passages from their books and journeys, all tying back to relations with Humboldt. For he built the skeleton which the others fleshed out in their own way. It is a pretty involving book and hard to put down, there are copious new ideas, and some historical views into the social situation at that time, so it serves for anthropological interest of me as well. I don’t think I am really giving justice to the near 350 pages of this work, but I found the same pleasure reading it, and it has lead me to his personal works which I may come to enjoy later.