The Keq’chi Maya are an indigenous people that live throughout Guatemala and primarily in the states of Alta Verapaz and Peten in the cloud forests of the North. The prominence of their mythological tradition stems from  a book entitled the Popul Vuh, an ancient text that tells the stories of the early Keq’chi or Quiche, the creation of the world and different phenomena, familial geneologies, and folk legends. Through the language of exaggerated narration, memory, and representation, the Mayan Keq’chi beliefs and cosmology comes to be known. The translation I am reading is from Latin to English, and contains deep anthropological, theological, historical, and traditionalist fields in which to understand it from.

As a student of old Teutonic culture, Norse Mythology, and the Icelandic Edda and Saga literature, my usual bent is towards the branches of text that stem from the North Germanic regions, and pan-Scandinavian customs. I have read probably a few hundred works, folk stories, and legends that originate in the Icelandic tomes, yet I remain culturally sensitive in my travels and heavily influenced by the local languages and societies, so on a recent trip to Guatemala, I have been reading said book, the Popul Vuh, and without intervention on my own part have been noticing the similarities in these two vastly different branches of ancient civilization.

Kennings: Something any well read reader of the Icelandic Sagas and indeed the Edda or Amma, will indeed know and understand the use of kennings. Cheiftain Snorri Sturluson was the infamous Icelander who helped devise many of these kennings, and in my own opinion they are the lynchpin of all Icelandic mythology. They represent the advancement of language and poetry which the literate Northmen had even before the Christian Era, when almost all literature was instead composed by monks. To be simple, a kenning is a set of words or references to a single thing, idea, or phenomena. The kenning can be another way of speaking about something that is mentioned far too often, thus making it redundant, and in the Icelandic sagas, this happens a lot. For instance a Viking ship may easily be called by its name, but using kennings and compounded kennings allows the writer to implore their imagination into the subject, and the reader to create more verbally textual memories of the passage by thinking of it from a different angle. An example would be to call the ship as the ‘brine stallion’, ‘the wave horse’, ‘the vessel on the fish’s bath’, and so forth. In the Popul Vuh, I also observed this custom of using kennings in a similar fashion for instance in Ch. 7 of Part II, when a hawk is referred to as ‘he who devours snakes in the corn fields’, or when the Earth was created it was formed by ‘the Heart of Heaven, and the Heart of Earth’. The names of animals and trees are also referenced by many different words for instance the gum as ‘noh’ and ‘pericon’, and a different tree that exudes red resin is known as the ‘dragons blood’, or the ‘heart of man’. The kennings used in the Popul Vuh are indeed of a different calibre than those used in Icelandic literature, and of course for the purists they may say there is no comparison at all and each one is exclusively unique of itself, and that may be true as well, but for now I am only drawing certain arrangements of patterns between the two kinds of literature, what we might called an indigenous literacy, or ancient language style, that perhaps is lost to us now in our dialects and poetical minds.

Geneologies: The Sagas of the Norse Kings or ‘the 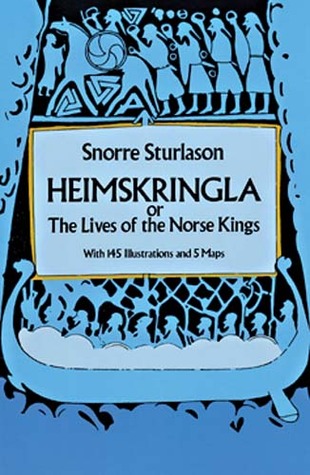 Heimskringla’ is but one major work of the Scandinavia northlands that deserves attention here, for it is literally all about geneology from the last Kings of Norway all the way back to the descendant lines of Yngvi-Frey or the Ynglings and that of Odin. Geneology and heritage in these works are sometimes daunting and monumental and it was only after several years of reading the Sagas and stories that I began to pick through them with any clarity rather than skipping through them. It is not uncommon in the first few paragraphs of a heroic saga to mention the familial ties ranging back as far as three, four, or five generations, naming each mother and father, grandmother and grandfather, each son and daughter and cousin. This can go one to the point of seeming mundanity and confusion as the Icelandic naming tradition, as in any culture had a specific set of names for males and females and names are often repeated within family lines. This kind of chaotic order of tracing geneology is fascinating for scholars but to the average reader can be offputting. A typical passage might enumarate the relatives of “Leif, who is son of Bestla and Bjorn, who also bore daughters Ingrid, Hildagard, and Solveig, and sons Ragnar, Svart, and Svein. Solveig also had two sons, one named Bjorn and the other Ivar. Leif’s grandfather was a wealthy chieftain in Iceland and had many wives ‘Astrid, Helga, and Bjork’, who in turn gave him many sons, Bjorn, Leif’s father being one of them.” I am just making this passage up but this is respectively how the opening passages of a true Icelandic saga can be expected. In the Popul Vuh, I came across this same kind of nomenclature of the men and women, and their familial ties. The opening of part II reads “Here is the story. Here are the names of Hun-Hunahpu and Vucub-Hunahpu, as they are called. Their parents were Xpiyacoc and Xmucane. During the night Hun-Hunahpu and Vucub-Hunahpu were born of Xpiyacoc and Xmucane. Well now, Hun-Hunahpu had begotten two sons, the first was called Hunbatz, and the second Hunchouen. The mother of the two sons was called Xbaquiyalo. Thus was the wife of Hun-hunahpu called. As for the other son, Vucub-Hunahpu, he had no wife, he was single.” And so it goes on like this naming off several members until all are accounted for, and then sometime later in the story they will make their appearance to some imporant degree, or be named specifically because they are to be known for some reference point of meaning.

Drama/Violence: Any good saga has some violence in it, and sometimes it is extremely amusing to read of the antics that a band of stoutly countrymen inflict upon each other. Iceland was a lawless country for a long time, and several parts of the glacier country was known as the utangard because of the many horse trails that crossed it, lingering with thieves, murderers and outlaws. If I remember correctly, there is a passage in one of the Sagas involving a breeched whale, wherein a conflict between two Vikings arises, and they are fighting on the back of the whale while it is being cut by others for the blubber. Here are the men in a holmgang or duel, and one of them is struck with the sword to his death. Just about every saga, even the romance genres are filled with duels, wrestling, revenge, killing, and domestic violence. In the Popul Vuh, there is also a high focus on violence and warfare.
The place of Xibalba for instance is a house of torture. When Hunahpu and Xbalanque are tricked by the Lords of Xibalba, they go through several chambers and places in which different types of discomfort, pain and violence are treated to them. They enter the house of Jaguars, where they must throw bones to the animals so that they not bite them. They go into the House of Fire, which inside ‘was only fire’, or the House of Bats, which sheletered a creature that killed using its stingers. The bizzare and strange ways of torture are also complemented with human violence, in the way the head of Hunahpu is used for play in the ball game, a kind of primitive Mayan soccer that is itself incredibly aggresive that might make the British football teams seem tame. The violence in both this Mayan/Central American literature and the far sub-arctic North are worlds apart, yet add a kind of comic relief, and may intrigue readers of general novels to reading both of these works.

The last that I wish to mention, although there may be more ties I can draw out, is the evident nature of the oral tradition. The Popul Vuh IS the word, and thus the Saga is too the story of someone or several people retelling actual events but through a lens that is subjective and often exxagerate or phantasized. Regardless, these books are dictums of the oral tradition and passing on stories from one generation to the next, and the fact that we still have them here with us, even if they be translated from heiroglyphs, runes, latin, or proto-Norse is besides the point. They have simply survived because of their remarkable nature and remain classics because they are so interesting and compelling to read. I certainly could not read nothing but Icelandic sagas for all my days sitting in a rocking chair and imagining Viking warbands conquering the land, but it is fun to indulge in that sometimes, and the same to read the very primal sources of ancient cultures through a different lense, and being able to draw from it, the sources of its humanness and roots of our language.