Adapting a dynamic with animal spirits or connecting to energies from parallel universes is like sowing a field of plants. Totemic work, or shamanizing is one thing further. One must first acquire knowledge, and imbibe the wisdom from their ancestors or kin. They they acquire and set the territory in which their great work will take place. It is highly kept and disciplined. Over the years of being exposed to the different interpretations of spirituality, I have made connections with seemingly inanimate objects and experienced them to be vessels of something far more than material.  Usually, the most powerful energies I draw from necrotic animal parts is during first contact. If I find it in its natural surroundings, with the scent of death still clinging to it, often still inside the animal or in process of decay. I feel suddenly detached from my comfortable life, almost vulnerable and then isolated with the animal. I don’t shy away from opening it up and looking at it’s postmortem state. Something I like to do is see if the grave wax (adipocere) has begun to form. This tells me how long the carcass has been dead. Also if there are maggots on the flesh, or in the case of bones and antler, any sign of moss and bacteria. It tells something about it’s life, it may have been solitary and have not been bothered much by humans because it’s territory was hidden. Whatever I have acquired or found, or collected or was given, I have put to some practical use.Most often this just means I have something morbid to add to my bedroom or hang around my neck with small bones/claws etc. but on the rare occasion I have come into possession of some real gems. They have become an integral part of my meditations, and animistic relationships. I just wanted to share some of these, how I use them, and what their meaning is to me.

This skull is a cast of a Mexican male, above the age of 60. I was told by the owner some of it’s identifications, and can tell this because the front teeth are missing, eluding to it’s age. The cranial sutures have been almost entirely fused which only happens in elderly stages of growth. The forehead is more flat and the brow ridge more defined, also suggesting it to be male. I don’t know how this person died however, but there is damage to the cheek bones suggesting possibly a broken jaw. I use this skull in Chöd meditations. “Chod is a spiritual practice found primarily in Tibetan Buddhism. Also known as “Cutting Through the Ego,” the practice is based on the Prajñāpāramitā sutra. It combines prajñāpāramitā philosophy with specific meditation methods and a tantric ritual.” Traditionally music was performed using a kangling, and a drum called a Damaru. I personally don’t own these items, but I do have a femur bone of a deer and a hide drum. Sometimes I will keep the femur in one hand and the skull on my body whilst infusing the mind with emptiness. Chod, is the animal state, devoid of ego. One practice derived from the Monks, and later adapted by shamans in ceremonies (not called Chod anymore) was envisioning the body as a corpse, or seeing the self without flesh or organs, just a mass of bones. In Tibetan contexts, this was a way of uniting the self, in the archaic truth of emptiness, before what was. Lying in shavasana corpse pose, I feel very relaxed and my joints become loose and send my energy away back into the ground. It is part of an asana sequence called the Death Posture, where the final pose is being as a dead body. Seeing oneself without the ego is a way I find to very intimately connect with our animistic selves, embracing the pure biology of the body whilst being unat 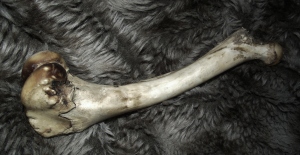 tached to the intellect. It also aids me in connecting to any dream or animal spirit that forms a drishti, or point of focus in the mind’s eye. The femur serves the same purpose for the death posture. It resembles very closely a human femur and about the same size. We have the same skeletal structure as every other mammal, but in different proportions and arrangements, so this one naturally seems more appropriate to use as a tool. I am considering making this into a kangling.

This wolf skull came to me before I was fully conscious of my spirit animal. When I was living in Northern Ontario, I had visited a trading post at Native Land near where my old stomping grounds. I was fascinated by all the different pelts, native craft, organic clothing, and animal symbolisms. I naiively asked if they had any skulls, and they told me they knew a hunter who had lived in the region for nearly 50 years engaged in this lifestyle. They told me they would call him, and ask me to return later.

To my pleasure, I was told he was able to visit the trading post in one week, and thus I returned to meet him. At this time he told me about his trapping/hunting, and asked why i was interested in the skulls. He said he had a wolf and a beaver, and a fisher, but only brought the former two. I was thrilled to have this in my possession but did not know the meaning it would take on. I identify myself as a wolf in the totemic world, it is mostly psychological, but in states of trance and affected by the right environment and freedoms, I feel a therionthropic change between my human self and the wolf. I meditate with the wolf when I want to establish a connection with the wild feral side of myself.

The antlers and piece of deer tail were both found in the woods. I have always loved these, and when I found the tail/hind piece it still smelt very pungent of musky deer. There was no blood around it, and no footprints or animals tracks that I could discern though. It was a strange find, and I never found out how it got there. It may have been killed by coyotes, as I was hiking on native reserve land where they were common at night. The hair has begun to shed over time, and come off in my hand when I hold it. The skin underneath it has turned to mummified leather. This is a very potent talisman for me, and always makes me feel very modest. I close my eyes and see through the vision of the deer, with the antlers like compass tines guiding me through dream terrain. Every time I meditate on the deer, I am always with it or inside it, grazing or wandering vast areas like fields or steppe, and I think these two particular deer were not threatened by hunting and lived a peaceful life. The antlers were found in deep country and the fur as mentioned on native territory off a hiking trail.