So you’ve read 1984 and The Circle, and probably have a few other dusty dystopian novels sitting on your shelf, but have you gone so far back to the psychedelic mind of Huxley, even before Orwell’s tome? Based on a fictional society in London AD 2540, (if we get that far), the book is swelling with all the fears of the modern age that occupy the citizen of today. Savage exhibits, psyche conditioning, machine induced reporoduction lines, psyoachtive drugs, and artificially modeled sentience. The novel unravels a grim, but rather clean and ‘sophisticated’ summa of just 6 centuries of time ahead of that in which is was written, in a world where technology is running all full efficiency, and all ‘old world’ sentiments like love, beauty, tradition, and culture has been replaced by ‘feelies’, sex-hormone chewing gum, soma grams, and synthetic happiness. A loss of identity occurs that mirrors the Americanization of the world.

This book can be quite dense, which is why I opted for the audiobook (it’s rather ironic 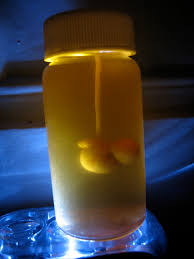 when I think about it). Huxley, whose imagination is on the far verge with other psychedelic thinkers like Leary, McKenna, and D.H. Lawrence, yet this work was produced by LSD was even synthesized. We are throw into a micro-controlled world, where people are raised from hatcheries into a caste system, perhaps those more perspicacious than I can already see this happening in the world of quantum physics, cloning, and experimental biology. It is a life no longer ruled by natural processes, and at every step of growth, the lower ranks of this caste are medicated by chemicals. I think of Dolly the sheep here, or the experiments to reproduce human tissues and programming new dna on a laptop while sitting at a cafe, all ideas and realities on the frontiers of modern science. A scary reality indeed.

These pseudo humans are controlled through subliminal messages. If you have ever seen ‘Fantastic Planet’, these are the scenes I think of, between the Draags and the Oms. Radical thinking is not allowed, and classic literature is taboo or banned. In my opinion I think we are already there, or partially guilty, when our modern libraries carry the drivel of lackluster fiction works on every shelf, but are rare or sparse in the classics, the sagas, or the philosophies or ‘politcally incorrect’. And our most radical thinkers are put in secret prisons for thought crimes, does this sound familiar? The ‘feelies’ live in a herd mind, where recreational sex, and an all powerful drug is administered if anything goes wrong. They are encouraged to keep in order, don’t stand out, don’t be alone, don’t look too weird, etc. It’s like the social media illusions that now 4 billion people play at,

pretending to have real relationships, when in fact, their identity is locked up on a supercomputer without an un-hackable IP address, and anyone and everyone can get a biography of your everyday life with a few clever navigations on a laptop. Huxley invents a plethora of really clever mantras and memes ‘a gram is better than a damn’, ‘everyone belongs to everyone else’, and speaks to the confused, and ignorant state that the latest line of humans belong to, the only altered state of consciousness most of the world is going to embrace anyways.

I like the book for its satire, its ability to play with the reality of godlike ability, and its references to indiginous ‘savage’ culture. In some chapters of the book, the ‘feelies’ take their copters to America, behaving like tourists on holiday at these primitive resorts. They watch elder and people of the village who live in ‘filth’, and dance to beat of drums, and see their aesthetics as so far removed from themselves, that there is no real dynamic between them at all. One of the pseudo humans and the savages eventually fall in love, and the book takes on an ideological, questioning tone of the nature of behavior and freedoms. I enjoyed picturing these bizarre scenes, of a wild hunter gatherer in metropolis London, trying to bring liberty to the slaves. Something interesting happens when he escapes, which I will let you get to the end for. Another interesting bit is when the master of control threatens one of the feelies for acting out of line, saying he will send him to Iceland. It’s like Iceland is the opposite of this rigorous controlled existence, and from my visits here, it comes pretty close. Who would want to live in a self sustainable existence, in the country, with unexpectant weather and beauty anyways?

There are numerous allusions to modern day phenomena, and a unique humor that is rather lost in todays work in this genre, which can be appreciated even more if one can put themselves in the time frame this was written. One of the most lasting lines of this masterwork of Aldous Huxley’s was uttered by the savage when he is pressed to admit what he wants and is willing to accept in life, he says “the right to be unhappy”. I think it speaks volumes to the way that other people are trying to always rigidly keep us in one narrow minded frame of the human experience, to control the intake of stimulus, emotion, and sensation so we no longer find the variety of psycholigcal states as useful. Not only corporations and media, but authorities like teachers, parents, bosses. In my own opinion, there is nothing wrong with being unhappy, or troubled, or inconvenienced, or poor, because there is a contrast for all these emotions, and the basic spark behind them also keeps us thriving towards a greatness of our own. Brave New World, is one of those books that can be read more than once because it is so far out, and you might miss something the first time. If you read, or listen in my case, between the lines, you might pick out some valuable insights, lessons, or confronting ideas of the collective abstract ideas about the future, and of your own.

One thought on “Brave New World by Aldous Huxley: review”